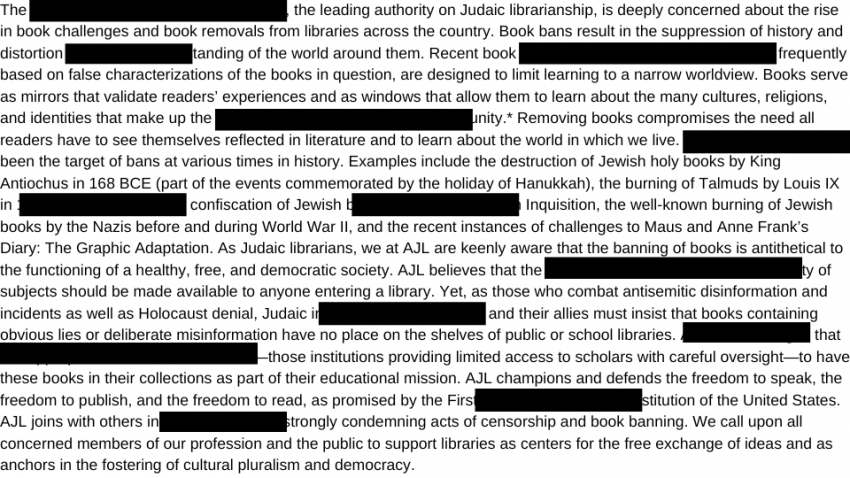 Association of Jewish Libraries Statement on Censorship and Banning Books

The Association of Jewish Libraries (AJL), the leading authority on Judaic librarianship, is deeply concerned about the rise in book challenges and book removals from libraries across the country.

Book bans result in the suppression of history and distortion of readers’ understanding of the world around them. Recent book challenges, aggressive in nature and frequently based on false characterizations of the books in question, are designed to limit learning to a narrow worldview. Books serve as mirrors that validate readers’ experiences and as windows that allow them to learn about the many cultures, religions, and identities that make up the American story and our global community.* Removing books compromises the need all readers have to see themselves reflected in literature and to learn about the world in which we live.

Jewish books have been the target of bans at various times in history. Examples include the destruction of Jewish holy books by King Antiochus in 168 BCE (part of the events commemorated by the holiday of Hanukkah), the burning of Talmuds by Louis IX in 13th-century France, the confiscation of Jewish books during the Spanish Inquisition, the well-known burning of Jewish books by the Nazis before and during World War II, and the recent instances of challenges to Maus and Anne Frank’s Diary: The Graphic Adaptation. As Judaic librarians, we at AJL are keenly aware that the banning of books is antithetical to the functioning of a healthy, free, and democratic society.

AJL believes that the widest range of viewpoints on a variety of subjects should be made available to anyone entering a library. Yet, as those who combat antisemitic disinformation and incidents as well as Holocaust denial, Judaic information professionals and their allies must insist that books containing obvious lies or deliberate misinformation have no place on the shelves of public or school libraries. AJL acknowledges that it is appropriate for research libraries—those institutions providing limited access to scholars with careful oversight—to have these books in their collections as part of their educational mission.

AJL joins with others in our profession in strongly condemning acts of censorship and book banning. We call upon all concerned members of our profession and the public to support libraries as centers for the free exchange of ideas and as anchors in the fostering of cultural pluralism and democracy.