The Feldman Children’s Library was established in 1992.  Its purpose is to serve the children, families, and teachers of Congregation B’nai Israel’s preschool and religious education program.  It was named after founders Larry and Diane Feldman.

Records of early Library Committee meetings fairly seethe with excitement.  The project was taken seriously from the beginning.  Consultations were held with the Central Agency for Jewish Education and local librarians from the Jewish Community Center.  The new library became a member of the Association of Jewish Libraries.  A collection of over 1,000 Judaic books and secular preschool books was established.  Four computers were installed for educational games.  A fundraising program was set up in which “Birthday Books” could be purchased in honor of the donor’s loved ones.  Plans were made to do weekly story times for the preschool, and to have classes from the religious school visit the library to borrow books.  Research workshops were scheduled for children preparing for their bar and bat mitzvahs.

The first part-time librarian was Maria Walansky, who began at Congregation B’nai Israel as a secretary in the preschool.  Her background included work with learning-disabled and gifted children, and Judaic preschool experience.  She had an Associate’s Degree in computer programming, and had worked with the Board of Education.  A very artistic woman, she excelled at creating beautiful bulletin board displays to promote reading.

In 1998 Maria moved on and Heidi Rabinowitz (at the time, Heidi Estrin) was hired as full-time librarian.  She brought with her a Master’s Degree in Library Science from the University of Pittsburgh and experience in public library youth services in Pittsburgh, PA and Broward County, FL.  Under her direction, story time became the most popular “special” in the preschool (other specials include music, yoga, Judaics, and sports). The collection has benefited from her wide knowledge of children’s literature.

In the summer of 1999, the library was renovated and expanded to a size of approximately 1,000 square feet. A rededication ceremony was held in January, 2000, and the library received Basic Accreditation from the Association of Jewish Libraries that same year; Advanced Accreditation was received in 2011. The library is open and airy, and features a very realistic “Tree of Knowledge” with names of contributors inscribed on the leaves in gold ink. The Howard Computer Lab next door, overseen by the library, features ten networked, Internet-accessible touchscreen computers on height-adjustable desks for use by the students in both schools.

The library catalog was automated with Surpass Software in 2004 and the collection has grown from approximately 1,000 to over 10,000 volumes at a wide variety of reading levels. There is a large Judaica collection, and a secular collection of picture books for the preschool. A bibliotherapy section for families deals with such issues as a new baby in the family or a divorce. The Cannon Family Social Action Collection was established in 2019 to encourage acts of tikkun olam. 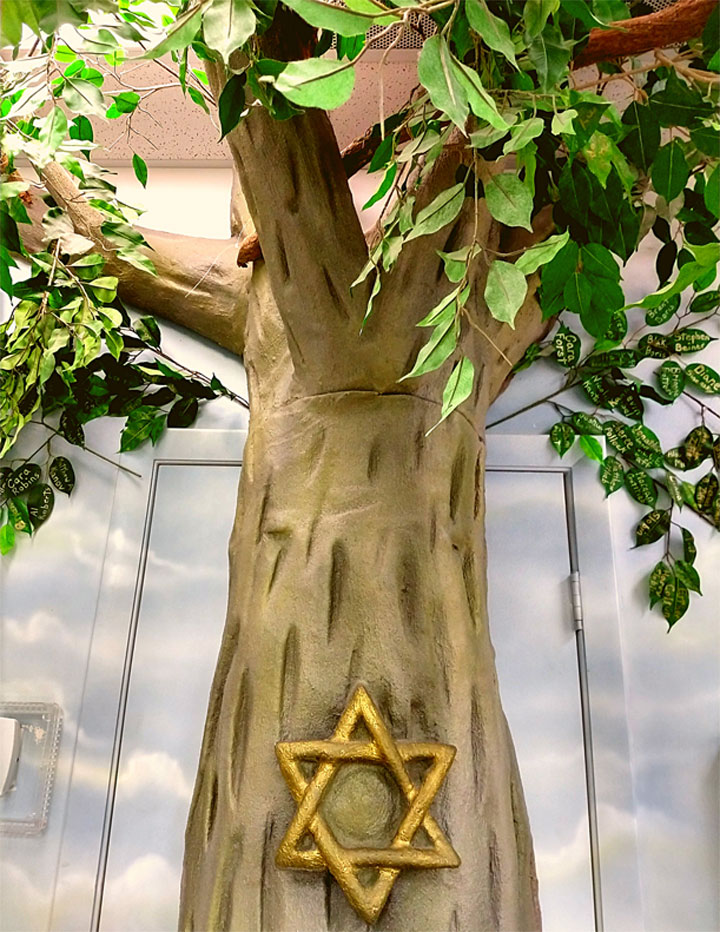 Feldman Children’s Library “Tree of Knowledge” with names of contributors inscribed on the leaves in gold ink. 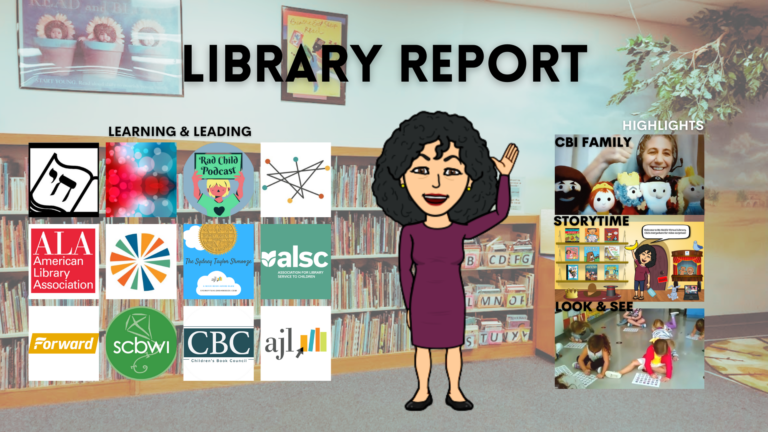 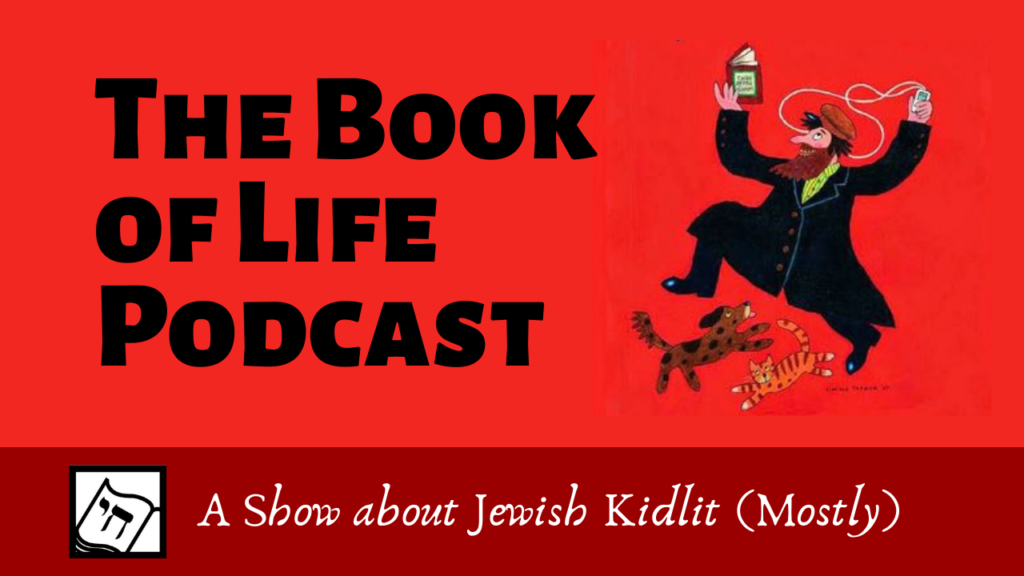 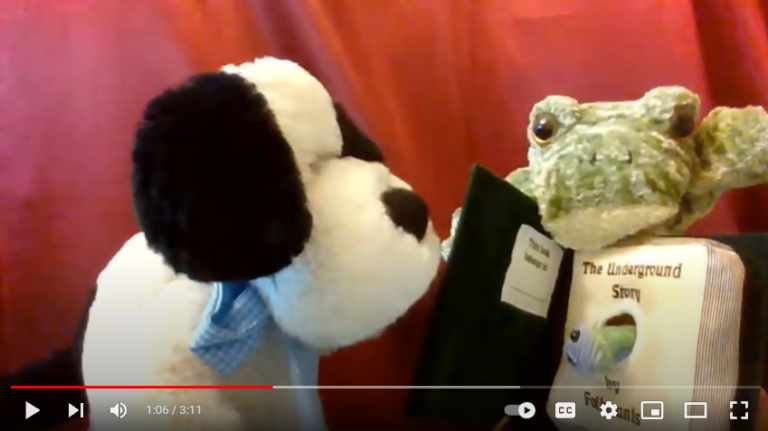 Heidi’s digital Library Report recounts the various projects and programs she has provided throughout the year and includes a virtual library of storytime videos for CBI students.

THE BOOK OF LIFE PODCAST

Heidi’s podcast, The Book of Life, co-sponsored by the Feldman Children’s Library and AJL, has been promoting Jewish literature to readers since 2005 with author interviews and more.

Joke Time with Dog & Frog is a series of short puppet show videos created by Heidi and her husband, as a way to enrich Zoom storytimes. Puppets build language skills and encourage kids to use their imaginations. 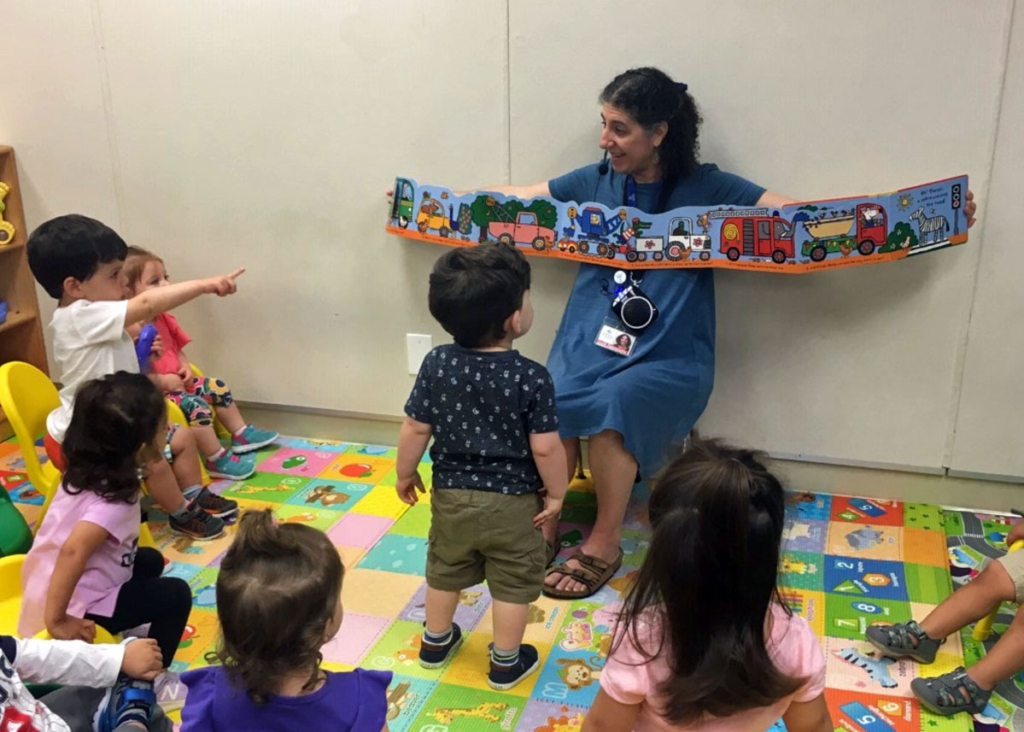 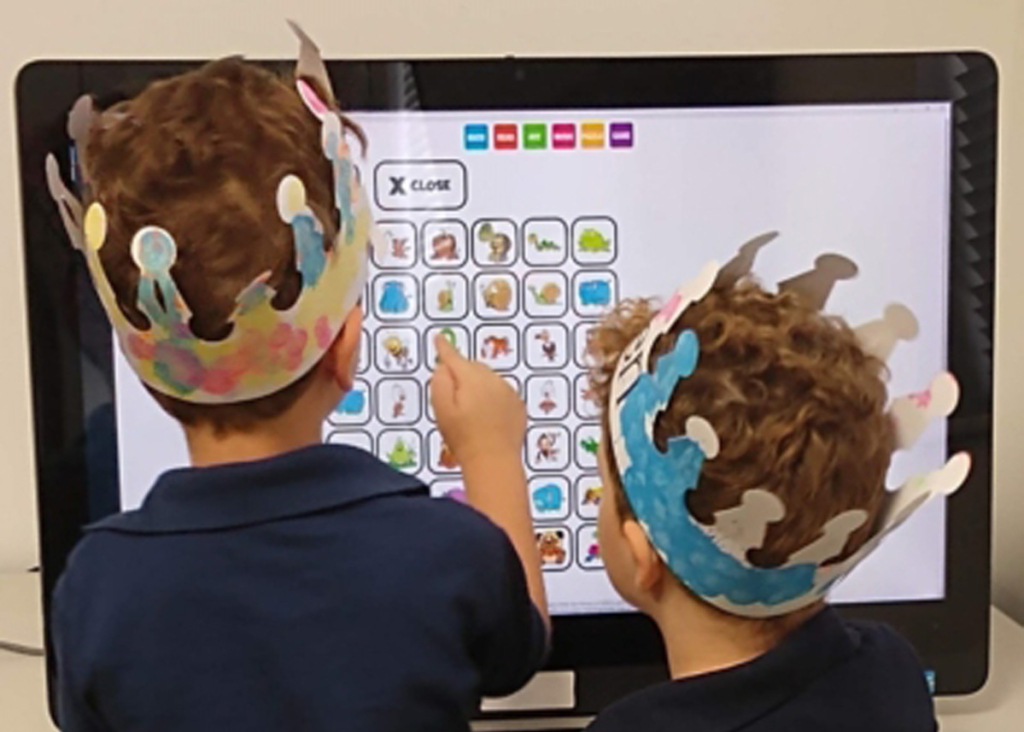 Librarian Heidi Rabinowitz performs 25+ storytimes and 12+ “Look & See” visual literacy specials each week for the children of the Nadel Center for Early Childhood Education, as well as offering library visits and staff support upon request to the Barry Ira Graff School for Living Judaism.

In March 2020, Congregation B’nai Israel pivoted to virtual religious and educational services in response to the COVID-19 pandemic. The library remained an important connection to the community. Heidi filmed storytime videos, assisted less tech-savvy teachers with creating their own videos, created a virtual library using Bitmoji and Thinglink, ran tech training workshops for the teachers of the preschool and religious school, and reinvented live Storytime, Look & See, and Boogie with Books enrichment classes on Zoom.

Highlights of Our Collection 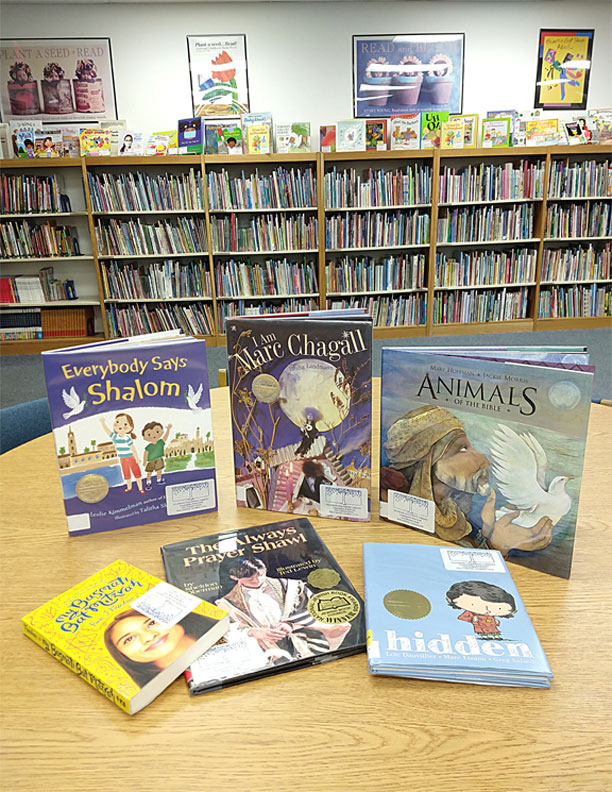 Our Partnership with AJL

Librarian Heidi Rabinowitz came to Feldman Children’s Library with a public library background, having worked in the children’s departments of branches at Broward County Libraries in Florida and the Carnegie Library of Pittsburgh in Pennsylvania. The Association of Jewish Libraries was critical in helping her get up to speed on Judaic librarianship. “AJL provided and continues to provide me with training, mentorship, collegiality, and a strong, reliable network of like minded professionals willing to share their knowledge, through annual conferences and year-round communications,” Heidi stated.

Feldman Children’s Library has benefitted from AJL’s accreditation program, earning first basic and then advanced accreditation, demonstrating that the library lives up to AJL’s  highest standards. “Our collection has also benefitted from AJL News & Reviews, where we learn about the best new titles.” The collection has gained hundreds of free books through Heidi’s work as a reviewer and as a member and past Chair of the AJL’s Sydney Taylor Book Award committee.

Plans for Our Future

The Feldman Children’s Library will continue to provide reading readiness skills, literary enrichment, and Jewish learning to the children and teens of Congregation B’nai Israel. As always, the library will partner with the preschool, the religious school, and the synagogue in established ways and constantly seeks new opportunities for connection. We will continue to diversify the library collection, ensuring that our patrons find information and inspiration about their Jewish heritage while also connecting with other cultures through literature. An antiracist mindset will be used to evaluate titles for collection development.

Feldman Children’s Library serves as a model for other synagogue libraries in the local community and across the world. Librarian Heidi Rabinowitz will continue her deep involvement with the Association of Jewish Libraries and the larger children’s literature community, advocating for and championing Jewish representation wherever the opportunity arises. 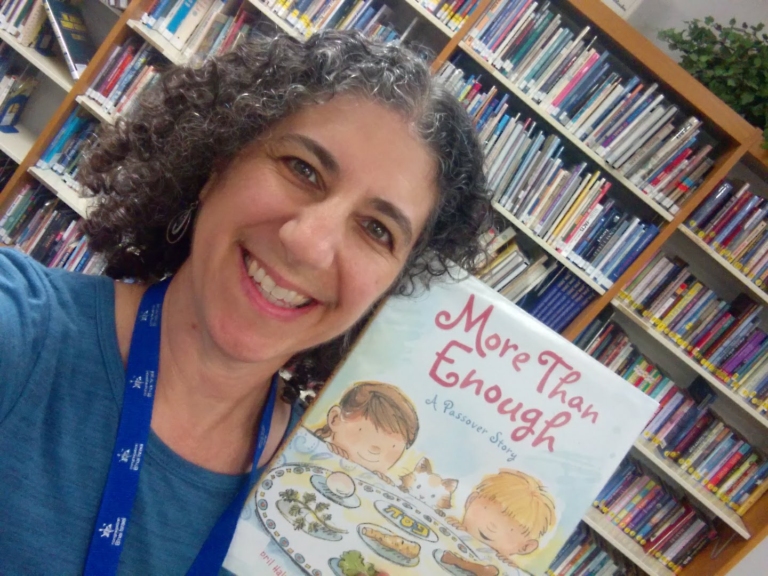 Heidi Rabinowitz works to make the Feldman Children’s Library the best it can be and supports Judaic Librarianship as well. Heidi has been heavily involved with the Association of Jewish Libraries since 1998. She assisted with the 1999 AJL Annual Conference in Boca Raton, Florida. She has served on Mentoring, Sydney Taylor Book Award, Sydney Taylor Manuscript Award, Public Relations, and Member Relations committees. Heidi was AJL South Florida chapter President 2000-2011, and AJL National President in  2012-2014. She received the Fanny Goldstein Merit Award for contributions to AJL and the profession in 2016 and the Inaugural President’s Award for outstanding contributions to AJL in 2021. Heidi has attended every AJL conference, whether in person or virtually, since 1999 to the present.

Heidi’s podcast, The Book of Life, has been promoting Jewish literature to readers since 2005. 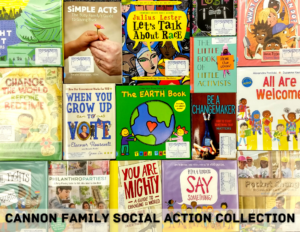