The University’s library had a modest beginning. Its quality and content were due to the dedication and efforts of one person, Dr. Louis Shub, who became its first–and only-director in 1954. [Since Dr. Shub’s retirement, there have been two more directors, Rick Burke and the current director, Paul Miller.]

Shortly after the University was established, the Jewish Theological Seminary transferred to its West Coast branch two collections, totaling about 2500 volumes. These were mostly rabbinic books, including commentaries on the Bible, and were considered a good basic library in Judaica.

In the University’s home on Ardmore Avenue, the library was housed in the dining room, which had several beautiful paneled wood bookcases fronted with glass doors, where the books were kept under lock and key. Not many people sought access to the books, but those who did could only gain entry if Dr. Shub was available.

The library did not begin to grow until the move to the Sunset Boulevard building; here the library was initially housed in what had been a basketball court on the second floor. The library’s growth. however, meant expanding and breaking through walls to the two adjacent handball courts (where there were also art classrooms and a dance studio). This change afforded three stack rooms. Dr. Shub called it “the victory of reading room and Judaism over Hellenism” – this from an avid sports fan!

The library expanded even more when the University of Judaism, which was to become American Jewish University moved to the Familian Campus off of Mulholland Drive. Now, the bookcases were located in the front of the library’s but without doors and no longer under lock and key.

A unique feature of the library was the Documentation Center which dealt with contemporary Jewish affairs. “The idea started as an avocation of Dr. Shub’s while he was still with the American Jewish Committee. Shub’s hobby was to rise at four-thirty or five in the morning, read the newspapers and periodicals from all over the world, have them photocopied and placed in a wide range of files. The Center increased from zero to a total of close to a million copies of articles and excerpts from newspapers and periodicals, gathered over a period of twenty-five years and included within at least 3000 classifications.

On the average, about 12 or l15 newspapers were perused daily, and their relevant materials noted, clipped and eventually filed. They included the New York Times, Washington Post, Christian Science Monitor, London Times, Los Angeles Times, and five or six Israeli papers. For those items which were of immediate interest and importance, the process was usually completed within a day or two. The 500-plus subscription periodicals were also surveyed and pertinent items copied and filed.23

The areas covered by the Documentation Center included Israel and the Middle East, but also reached out to global areas of concern. These included Israeli and Jewish personalities, issues such as “Church and State”, materials on Jewish communities in the United States and elsewhere, and many more. The Center’s extensive files thus provided a major resource for all the subjects with which it dealt. 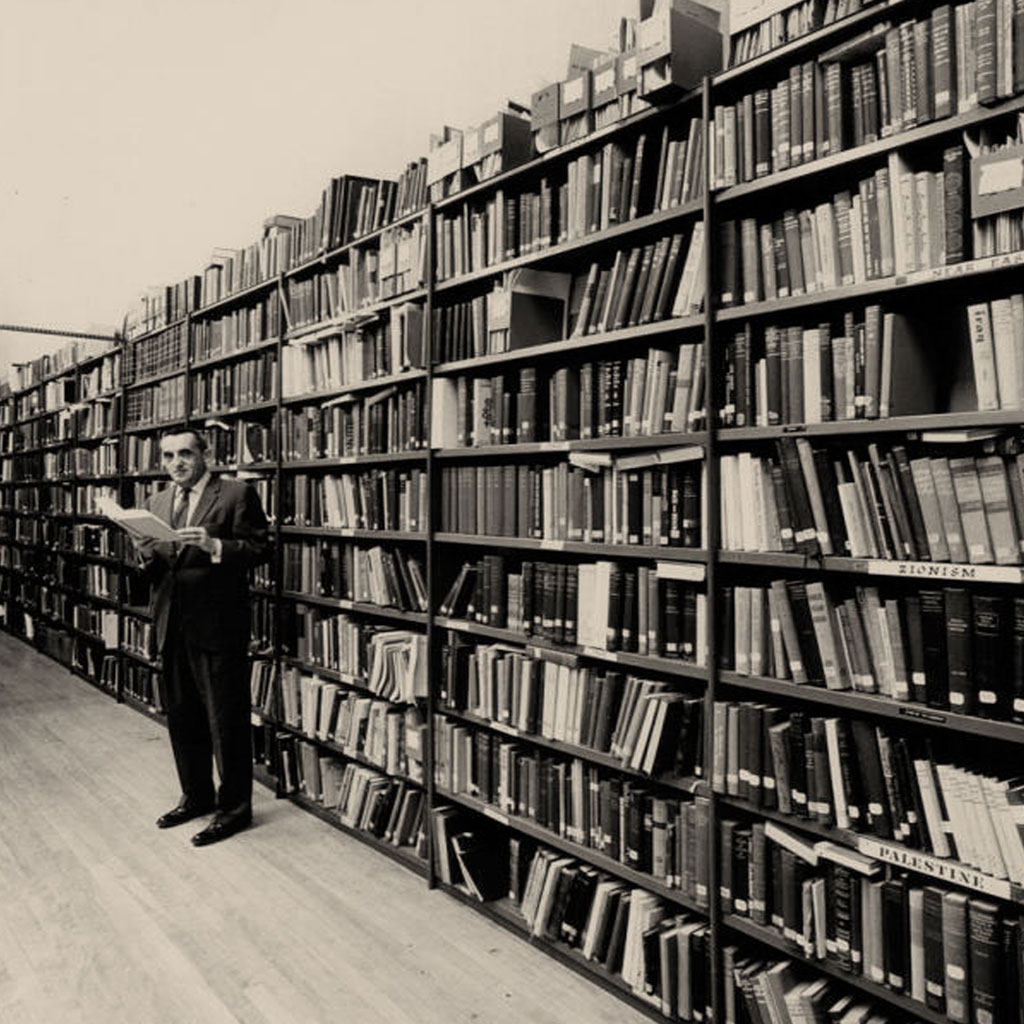 The Shub Documentation still exists today in a digital format, which is accessible only from the library.

The library was completely renovated and expanded in 2013 to include the Lowy-Winkler Rare Book Center. The old dark stacks were brought out into the open and rolling bookcases were installed to make it possible to house more volumes in a light-filled environment.

Welcome to the Libraries of the American Jewish University! We are proud to serve all AJU students, faculty, and staff, as well as members of the general and scholarly community. Our mission is to support learning, research, and personal enrichment, in an inclusive, welcoming environment

rich electronic resources, DVDs, CDs, and microfilm. With free Wi-Fi, 8 public use computers, study rooms, carrels, couches, easy chairs, and large tables, the library is a comfortable place to study, research a topic of interest, and enjoy leisure time. Please ask for assistance in using the library’s abundant and varied resources. Our reference librarian and staff are happy to help you.

The Lowy-Winkler Family Rare Book Center, a gift of Peter and Janine Lowy, is home to the Maslan Bible Collection and this unusual assemblage of exceptional volumes includes approximately 3,600 Bibles, some dating back almost to the inception of the printing press. This collection also features bible translations representing most of the written languages of the world, as well as the Kalman-Friedman Collection of Italian Judaica. 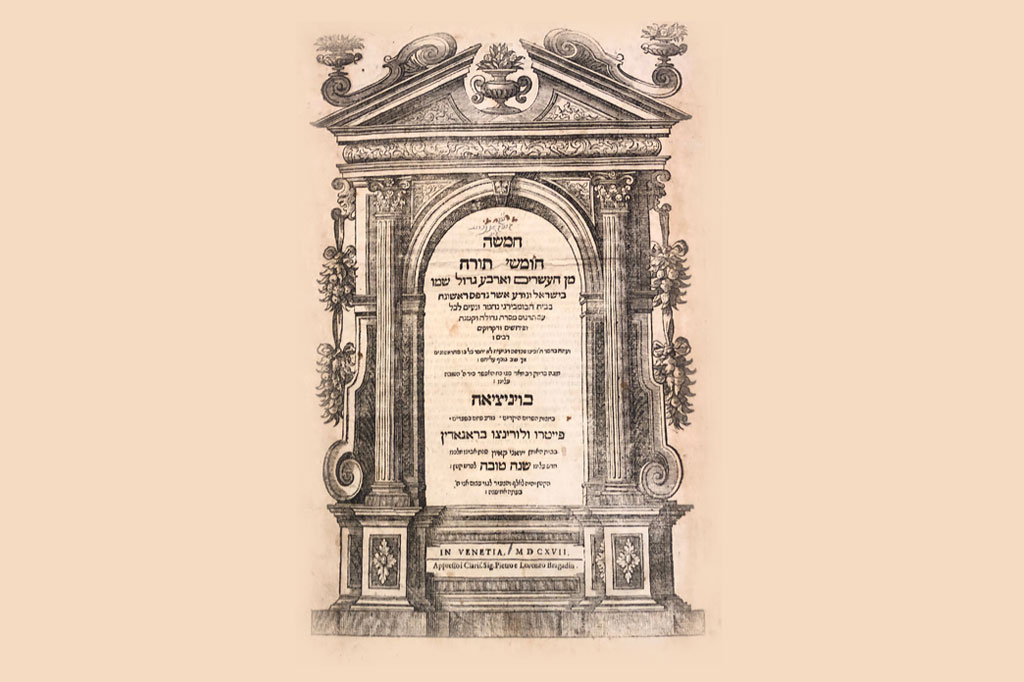 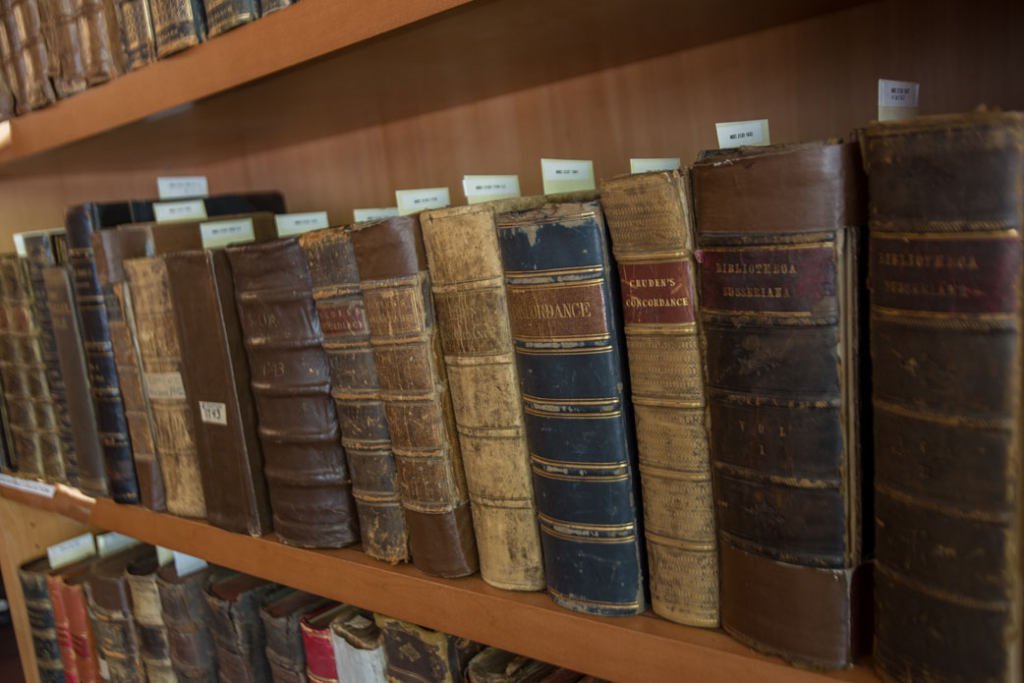 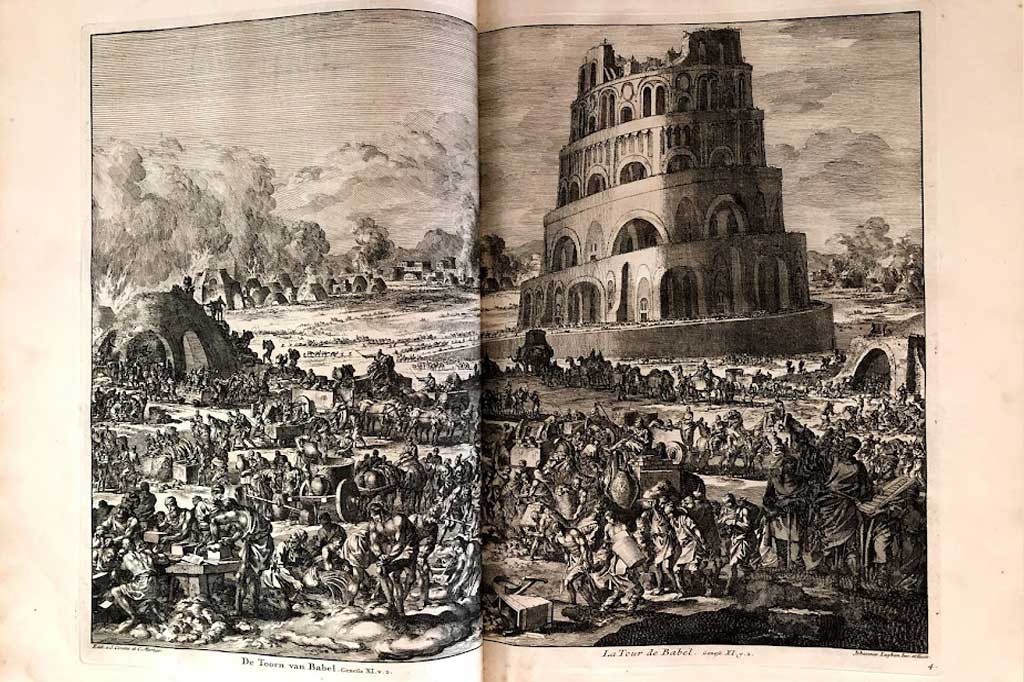 Most of the volumes you see within the Rare Book Center are the nearly 3,600 rare and unique bibles and other sacred works of the Maslan Bible Collection. This collection also features bible translations representing most of the written languages of the world.  This collection began when a Seattle attorney, Ben Maslan, asked at the last moment to address the local bar association on biblical versus secular law. He went out to buy a bible in a used bookstore to use for his research and he was hit by the collecting bug. He would make hunting for bibles a family activity, with the youngest child accompanying him asking store owners “You wouldn’t happen to have a slightly used Gutenberg?” The Gutenberg Bible was the first book printed on a printing press in 1454! 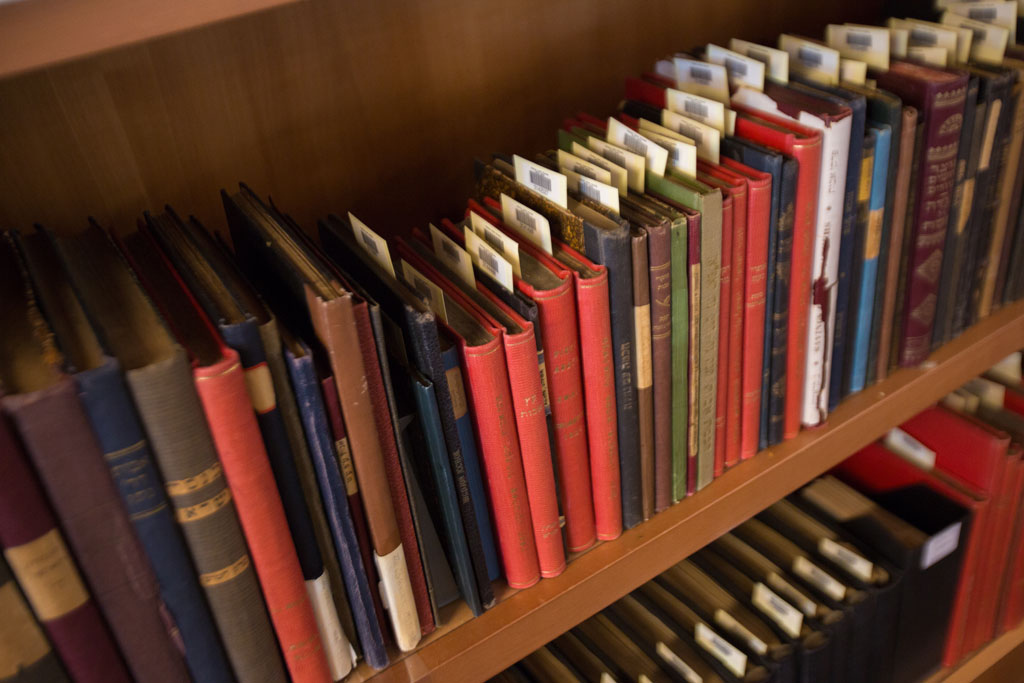 Ostrow Library received from the old Jewish Community Library a large collection of various versions of Pirkei Avot–Ethics of the Fathers. This was collected by Rabbi Solomon M. Neches of Los Angeles’ Breed Street Shul. This collection has titles from 5 continents spanning 500 years. It also includes 13 binders of his manuscript of a biblical lexicon. Oddly enough, the tapestries in the old AJU sanctuary based on themes from Pirkei Avot made by the artist Phil Ratner were hung in the very spot of the current rare book center. The tapestries are now at the back of the main library. 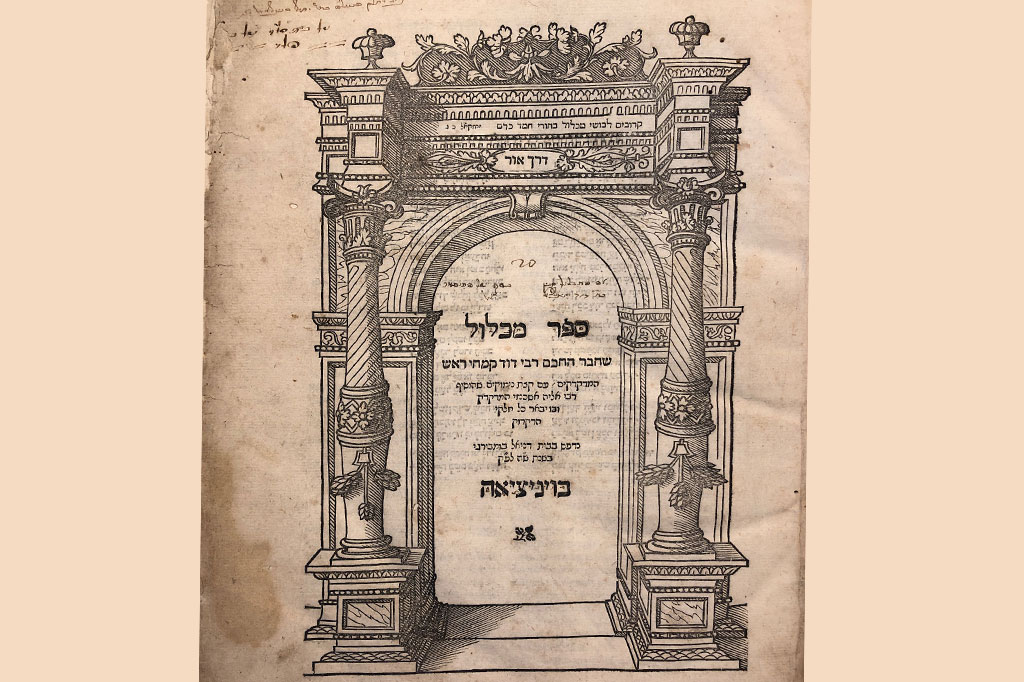 Another major section of the collection is that of Rabbi Kalman Friedmann, former Chief Rabbi of Florence, Italy. Most of the Italian Jewish community and its 2000 year history vanished after the Holocaust. Rabbi Friedmann brought his collection of rare books and unique ephemera to AJU where he taught in his later years. 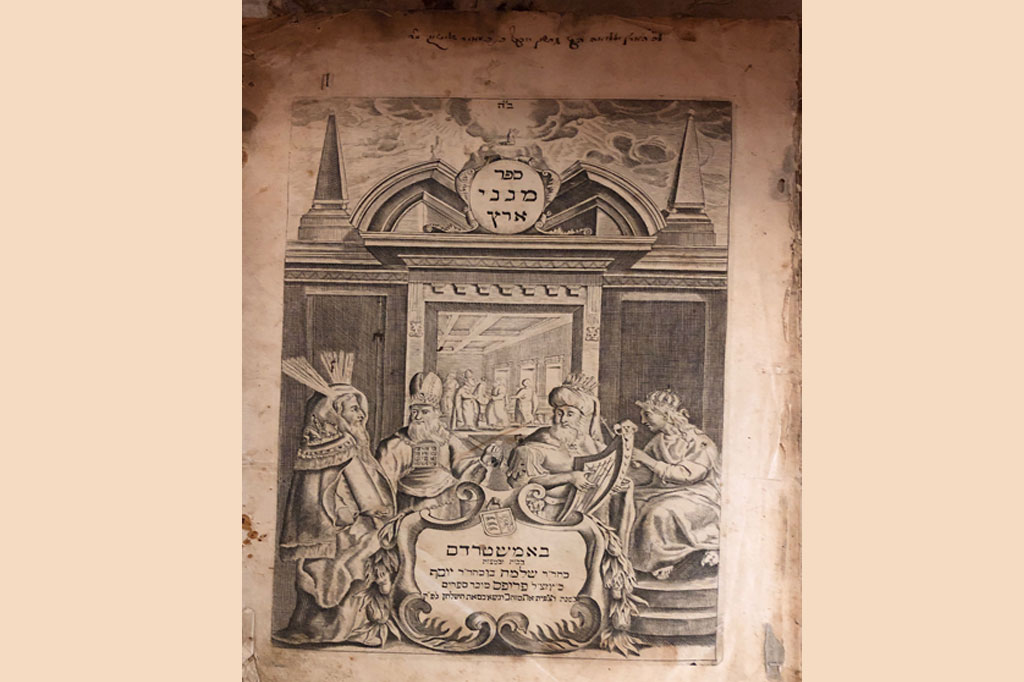 Rabbi Emil Klein saved several works of Judaica from small deserted synagogues in France after the first World War. Then in World War II he was interred in a camp near his home, he brazenly went to the Nazi commander to “ask for some blankets” for the inmates. While at the headquarters, which was in what had been Rabbi Klein’s home, he asked to have some Hebrew books to read. The Commandant said that they were filthy Jewish books and threw them out the window. Rabbi Klein left quietly, rescued the books a second time and then buried them in a neighbor’s back yard, a true righteous Gentile. 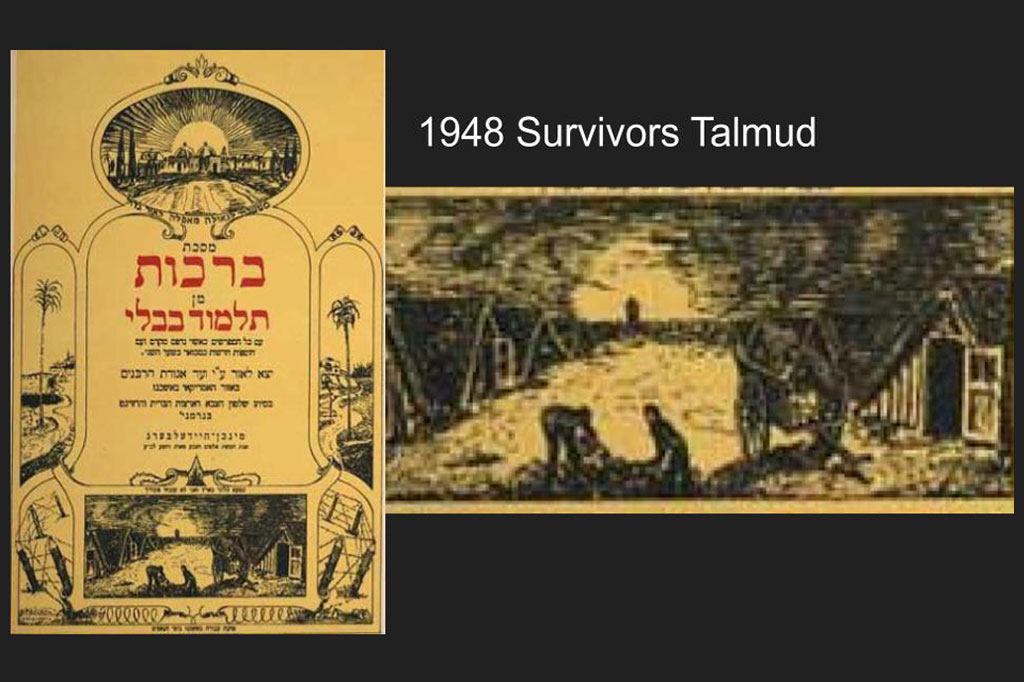 Another Holocaust related story is that of the Survivor’s Talmud printed by the U.S. Army. Two rabbis who had survived the Holocaust thought that by resuming their habit of daily study, Jews in the DP camps would get back to some semblance of normality. They made their request to a U.S. Army chaplain. The frontispiece engraved by one of the survivors captures the transition from Holocaust to the rebirth of Eretz Yisrael. You can learn more about this work from the recording of a AJU’sB’yachad Platform From Darkness to a Great Light event with Jackie Ben-Efraim, Special Collections Librarian at Ostrow Library. 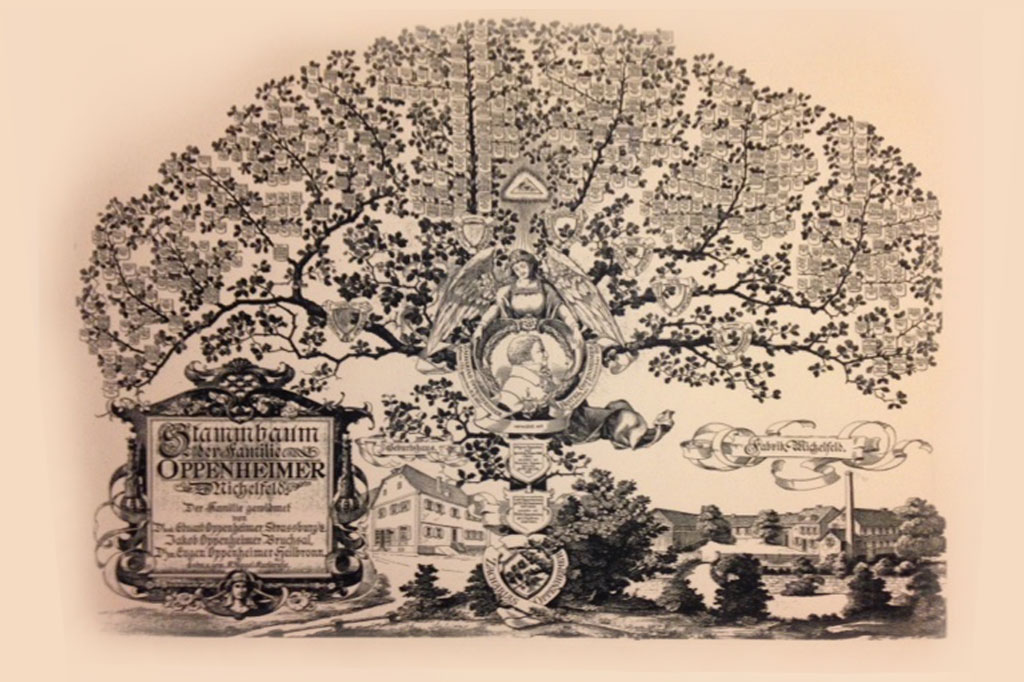 The Werner Frank Collection has some lovely volumes from the 19th century, including a very rare edition of the Haggadah from Leipzig can be found in the Lowy-Winkler Family Rare Book Center. The vast majority of the collection consists of genealogy resources and shtetl maps. These archival items are stored in the Phoebe and Werner Frank Family Room, along with mementos from the Frank Family home in Eppingham, Germany during the interwar period. 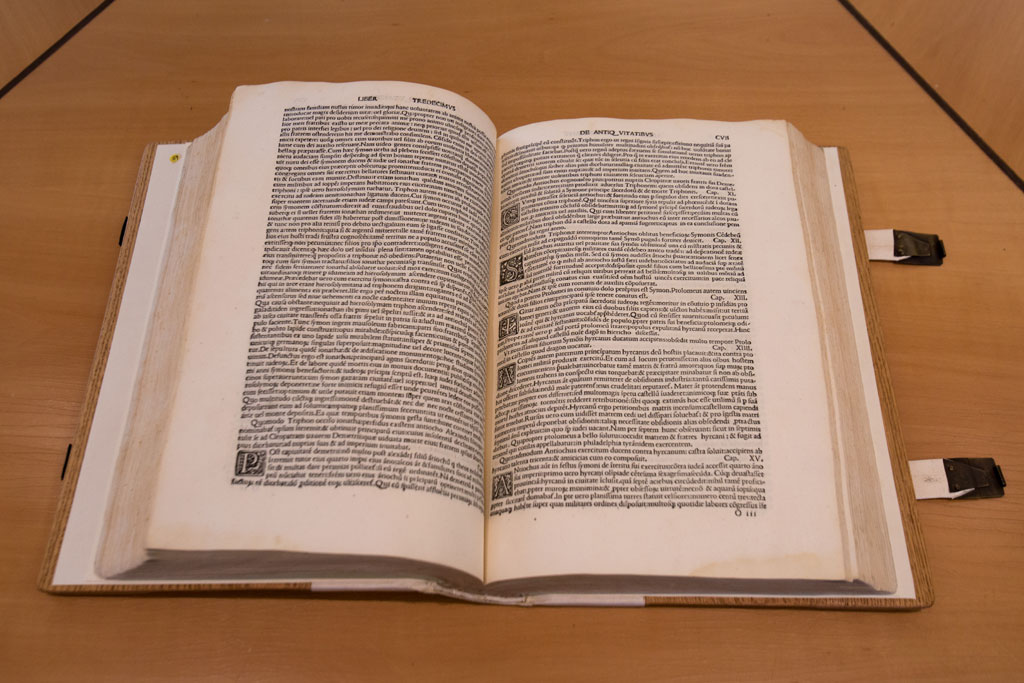 A small but important collection was donated to Ostrow Library by a long time library volunteer, Alex Lauterbach. The highlight of the Lauterbach-Marr Collection is a 1499 edition of the complete works of Josephus, allowing the Lowy-Winkler to display this finely rebound incunabula. Incunabula are books printed at the cradle of printing from 1455 – 1500.

Online and On Site Archives

Dr. David L. Lieber was the first president of UJ/AJU and an eminent biblical scholar. He edited the Etz Hayim Torah and Commentary published by the Rabbinical Assembly of United Synagogue of Conservative Judaism. The David L. Lieber Papers is a collection of thousands of documents, subject files, index cards, and media all created or gathered by Dr. Lieber throughout his life. The materials include publications, addresses, speeches, writings, correspondence, teaching materials and school papers. Dr. Lieber collected and created quotes, articles, bibliographies, and notes covering a vast amount of subjects, including Judaism, ethics, philosophy, religion, Israel, education and much more. The collection provides insight into Dr. Lieber’s life, his work, research and vast knowledge. For access please contact library@aju.edu.

The Louis Shub Documentation Center at the American Jewish University is a collection of thousands of articles from various newspapers and periodicals covering a range of subjects. Gathered by Dr. Shub, the former library director of the University of Judaism, the collection was used by students to research subjects such as Israeli and Jewish figures, Foreign Policy, Global Jewish Communities, Israel, the Middle East and many other issues and subjects. The importance of this collection is the juxtaposing of articles from major papers with those of small local papers both covering the same event. For access please contact library@aju.edu. 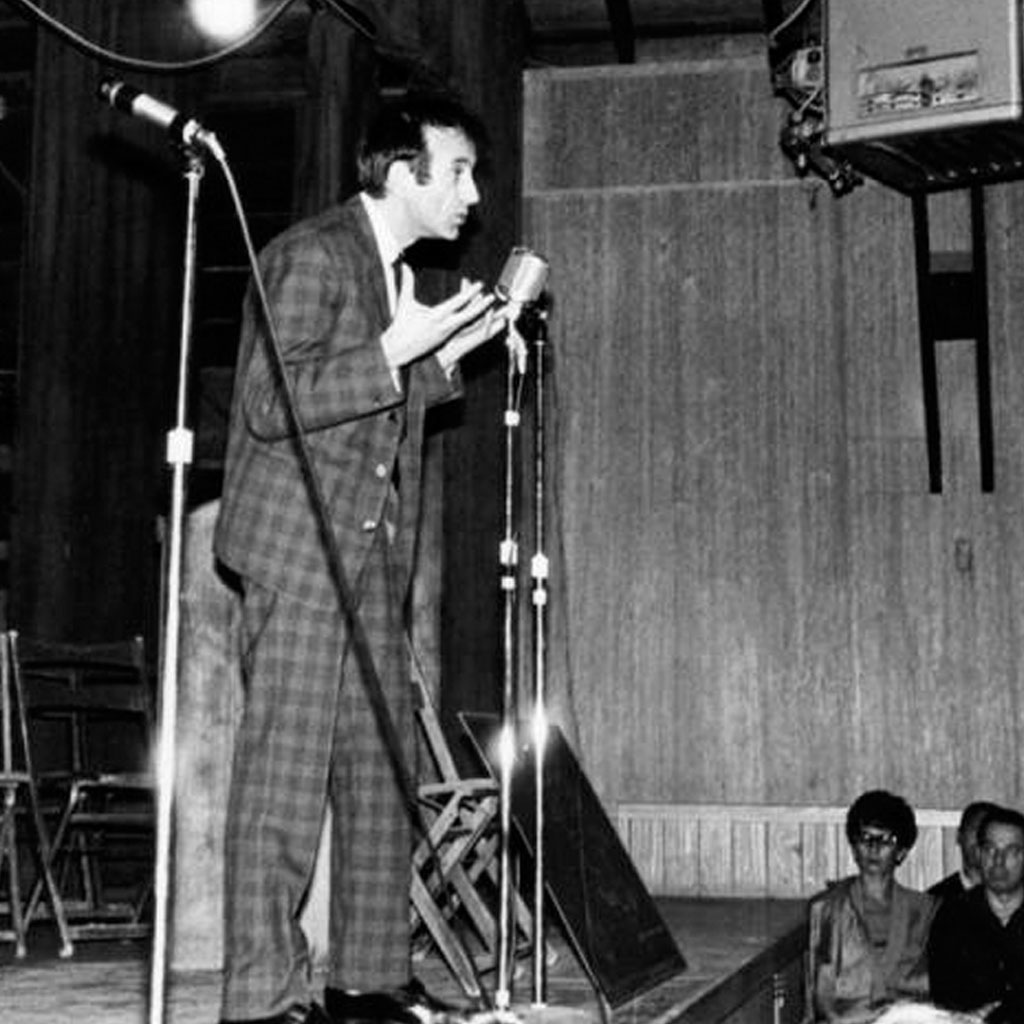 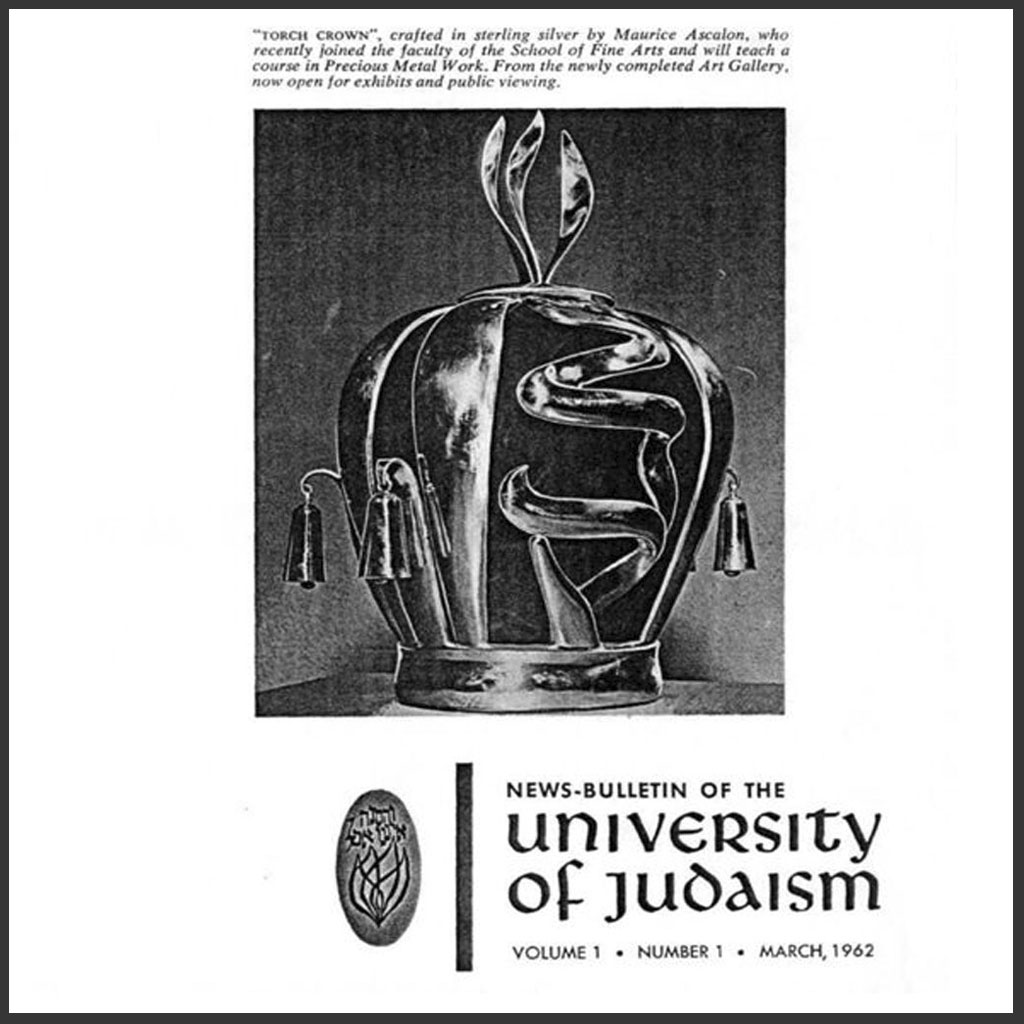 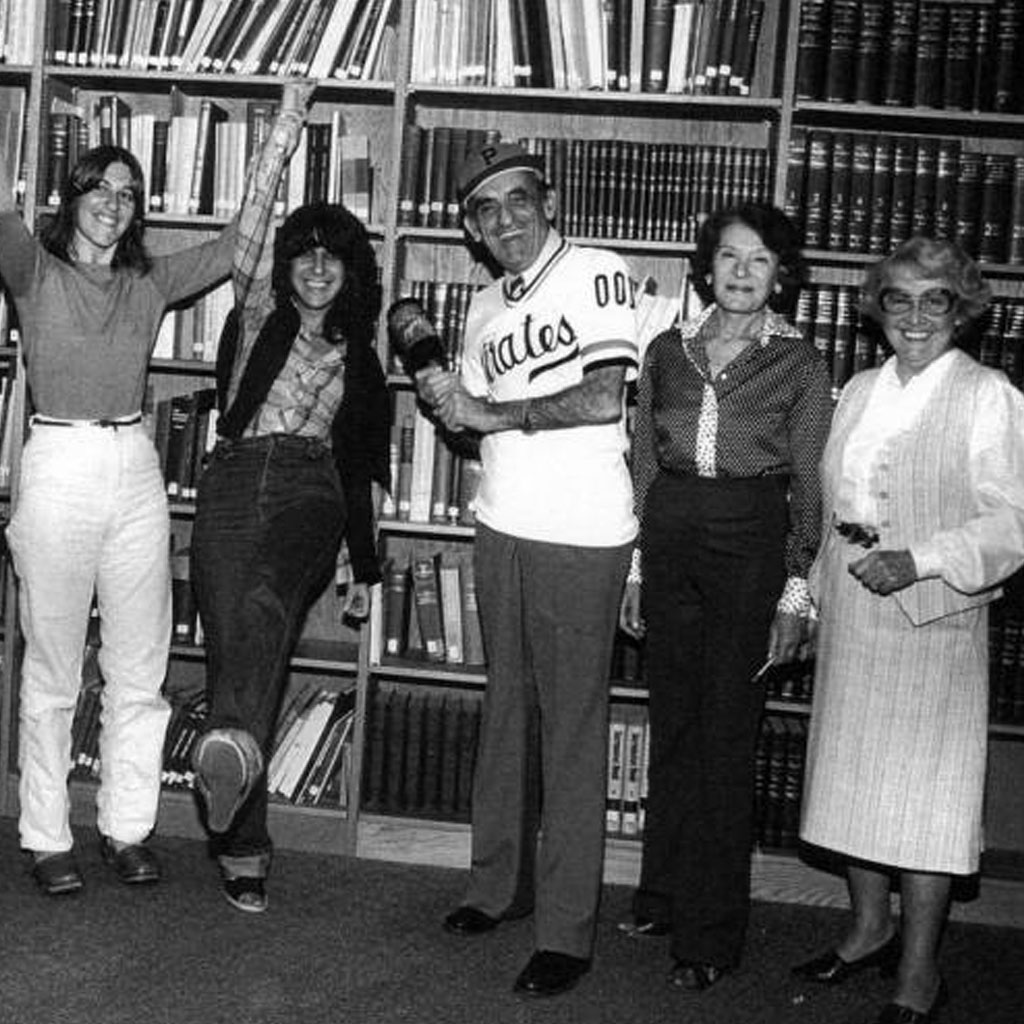 Our Partnership with AJL

AJU’s partnership goes back many years. Ostrow’s second library director, Rick Burke, was an active participant at AJL conferences. Two of our current staff members have served on AJL’s Board. AJU hosted AJL for the day during the successful 2019 Conference with two staff members serving as the conference co-chairs. Judaica librarians from around the world were impressed by Ostrow Library and delighted to see a cozy community library section.

Plans for Our Future 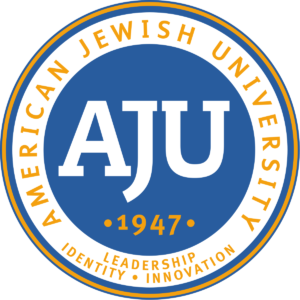 Guided Tours
By appointment only.

More information on how to book a tour: library@aju.edu

Appointments for Individual Researchers
For research purposes, scholars can make an appointment with the curator and send a mail to: jbenefraim@aju.edu.

Support the Ostrow Library of American Jewish University. Your gift promotes excellence in scholarship, teaching, and advances the Jewish wisdom of individuals and organizations. The Ostrow Library serves all AJU students, faculty, and staff, as well as members of the general and scholarly community. Please donate here.

Catalogue:
The public is invited to apply for a library card. Electronic are available to everyone while using the library in person. Only AJU students have access to electronic resources.
https://ajula.on.worldcat.org/v2