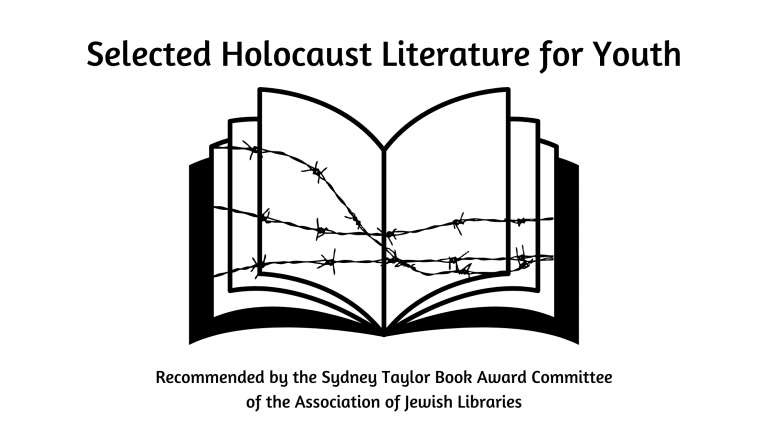 In December 2021, The Washington Post ran a story about a teacher who made third grade students reenact scenes from the Holocaust, including digging mass graves and shooting victims. The students also reported that the teacher made antisemitic remarks. As of this writing, the teacher has been placed on leave pending a school investigation. In the wake of this event, it seems appropriate to highlight Holocaust resources that can help educators and families raise children who understand this crucial period of history, and ensure their ability to apply the lessons of the Holocaust to our own times.

Here, then, are a few selections from the 200+ Holocaust titles that have been recognized by the Association of Jewish Libraries’ Sydney Taylor Book Award committee over the years. There are fiction and nonfiction titles for children and teen readers. Each title’s recognition status and age range is provided at the end of the annotation.

Bartoletti, Susan Campbell. Hitler Youth: Growing Up in Hitler’s Shadow. New York: Scholastic Press, 2005. ISBN: 0439353793 This well-researched, large format book describes the rise of Hitler and the Nazi Party, and World War II and its aftermath, through the eyes of twelve ordinary young people in Germany including those who participated in the Hitler Youth movement and those who resisted. (Nonfiction, 2006 Notable Book for Middle Grade Readers)

Bascomb, Neal. The Nazi Hunters: How a Team of Spies and Survivors Captured the World’s Most Notorious Nazi. New York: Arthur A. Levine Books, 2013. ISBN: 9780545430999 A stunning account of the mission to capture Adolf Eichmann by an elite team of Israeli spies is dramatically brought to life by Neal Bascomb. (Nonfiction, 2014 Award Winner for Young Adult Readers)

Frank, Anne. Anne Frank’s Diary: The Graphic Adaptation. Adapted by Ari Folman. Illustrated by David Polonsky. New York: Pantheon Books, an imprint of Penguin Random House, 2018. ISBN: 9781101871799 This graphic adaptation brings Anne Frank and the other residents of the Secret Annex to life. Though it makes the fear inherent in their situation clear, it also conveys plenty of ordinary, even humorous moments, reminding readers just how real the people were. (Nonfiction, 2019 Notable Book for Middle Grade Readers)

Iturbe, Antonio. The Librarian of Auschwitz. Translated by Lilit Thwaites. New York: Godwin Books, an imprint of Henry Holt and Company, 2017. ISBN: 9781627796187 This powerful story is based on the life of Dita Kraus and her protection of a handful of books in the Auschwitz concentration camp. It shows the importance of hope in the darkest of times. (Fiction, 2018 Award Winner for Young Adult Readers)

Kacer, Kathy with Jordana Lebowitz. To Look a Nazi in the Eye: A Teen’s Account of a War Criminal Trial. Toronto: Second Story Press, 2017. ISBN: 9781772600407 Lebowitz attended the first week of the trial of Oskar Groening, known as “the bookkeeper of Auschwitz.” She blogged about her experience, and as the granddaughter of Holocaust survivors, went through a myriad of emotions. Kacer chronicles both her account and the trial testimony. (Nonfiction, 2018 Honor Book for Young Adult Readers)

Leyson, Leon with Marilyn J. Harran and Elisabeth B. Leyson. The Boy on the Wooden Box: How the Impossible Became Possible…on Schindler’s List. New York: Atheneum Books for Young Readers, 2013. ISBN: 9781442497818 The late Leon Leyson has created an inspiring memoir about his experiences during the Holocaust. He was one of the youngest children on Oskar Schindler’s list. (Nonfiction, 2014 Honor Book for Middle Grade Readers)

Nielsen, Jennifer. Resistance. New York: Scholastic, 2018. ISBN: 9781338148473 When her family is upended in Nazi-occupied Poland, teenager Chaya Linder is determined to make a difference. Circumstances send her from being a courier, to raiding Nazi supplies, to finally the biggest mission of all, the Warsaw Ghetto Uprising. (Fiction, 2019 Notable Book for Young Adult Readers)

Rappaport, Doreen. Beyond Courage: The Untold Story of Jewish Resistance During the Holocaust. Somerville, MA: Candlewick Press, 2012. ISBN: 9780763629762 The authors present a sampling of actions, efforts, and heroism with the hope that they can play a role in helping to correct the damaging and persistent belief that Jews ‘went like sheep to the slaughter.’ Five years of research results in an important informational book, with back matter that includes a pronunciation guide, chronology, source notes, detailed bibliography, and an index. (Nonfiction, 2013 Honor Book for Young Adult Readers)

Roy, Jennifer. Yellow Star. Tarrytown, NY: Marshall Cavendish, 2006. ISBN 076145277X Told in verse, this is the story of Syvia Perlmutter, one of twelve surviving children, who hid in the Lodz Ghetto with her family. (Fiction, 2007 Honor Book for Middle Grade Readers)

Stamper, Vesper. What the Night Sings. Illustrated by the author. New York: Alfred A. Knopf, an imprint of Random House Children’s Books, 2018. ISBN: 9781524700386 This beautifully illustrated novel tells the story of teen Holocaust survivor Gerta as she struggles to reconcile her identity and desires in the wake of tragedy. (Fiction, 2019 Award Winner for Young Adult Readers)

Wiemer, Liza. The Assignment. New York: Delacorte Press, an imprint of Random House Children’s Books, a division of Penguin Random House, 2020. ISBN: 9780593123164 Based on a true incident, a high school teacher assigns students to argue in favor of the Final Solution. Two students fight back, and the resulting schism rocks the school and community. (Fiction, 2021 Notable Book for Young Adult Readers)

Zusak, Markus. The Book Thief. New York: Alfred A. Knopf, 2006. ISBN: 0375831002 Death narrates the story of Leisl Meminger, a Lutheran girl in Nazi Germany who sustains herself and those close to her, including the Jewish man hidden in her basement, with her love of books and reading. An engaging story that resonates with the full spectrum of human emotions and experiences. (Fiction, 2007 Award Winner for Young Adult Readers)